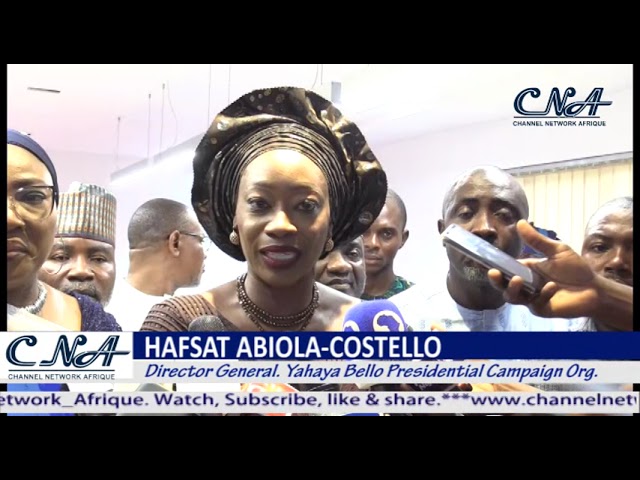 The Director General of Yahaya Bello Presidential Campaign Organization, Hafsat Abiola-Costello says Governor, Bello Presidency will mark the end to insecurity in Nigeria. Hafsat disclosed this while speaking with newsmen shortly after submitting his Expression of Interest and Nomination forms at the International Conference Centre in Abuja.

She said with the support being received so far, Governor, Bello who was the first to pick the N100 million APC Presidential Expression of Interest and Nomination Forms is optimistic of his emergence as the Presidential flag bearer of the party.

Meanwhile, the Minister of Science and Technology, Ogbonnaya Onu has called on the ruling All Progressives Congress to ensure a level praying ground for all the contestants.

Dr. Onu who made the appeal at the submission of the forms at the APC National Secretariat in Abuja urged the party to be transparency and fair to all. Represented by his spokesman, Uche Egenti, the Minister said if the party choose to have a consensus candidate, he will abide by the decision. Aspirants and their proxies have continue to troop the centre to beat the the submission deadline.