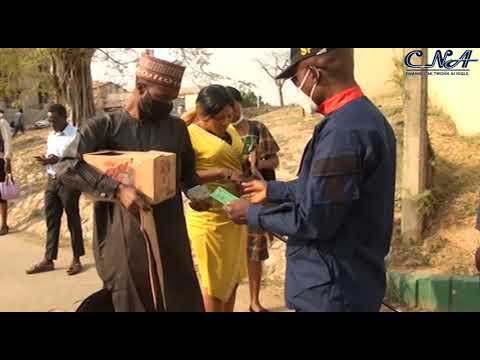 This mammoth crowd is neither a social or political gathering but that of staff of the Federal Capital Territory Authority (FCTA) barred from accessing their offices by security officers for not presenting their Covid 19 Vaccination Cards or PCR test results done within 72 hours as evidence. The development was as a result of the directives issued by FCTA, in a circular dated 10th January, 2022, advising staffs to be vaccinated before the enforcement day. The circular also warned staff against presenting snap shots of the covid 19 cards in their phones which will be rejected. Despite the warning, most staff tried to show their vaccination cards through their phone devices but were vehemently refused entry to the premises by security personnel. Channel Network Afrique crew who were at the Federal Capital Territory Administration to monitor the enforcement reports that the exercise was successful. Most of the staff for fear of being victimise expressed off camera their dismay over the decision to prevent them from accessing their offices. But for this man, he claimed that his vaccination cards was in his office drawer. Some dejected staff accused Health personnel for their ordeals as vaccination cards are yet to be issued to them. The Senior Special Assistant on Monitoring, Inspection and Enforcement to the FCT Minister, Ikharo Attah was on ground to ensure full compliance to the directives as some workers were seen queued up at the vaccination centre provided opposite FCTA Secretariat to get their jabs.