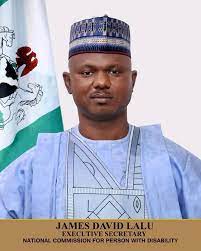 The Federal Government says plans are in the offing to commence full registration and biometric data capturing of People With Disabilities across the country.

Executive Secretary, National Commission For Persons With Disabilities, James disclosed this in a statement signed by the Head of Media and Publicity, Mbanefo John Michaels and made available to Channel Network Afrique (CNA).

The statement indicates that Mr. Lalu who played host to the Permanent Secretary (PS), Federal Ministry of Humanitarian Affairs, Disaster Management and Social Development, Bashir Nura Alkali, in Abuja said the exercise would enable easy identification of PWDs with proper certification that will integrate them into Federal Government’s programmes in 2022 and beyond.

He said the inclusion of PWDs in the Social Investment Programmes has given them some level of hope in alleviating their sufferings and sustaining their livelihood.

The Executive Secretary also briefed the Permanent Secretary on the importance of establishing some facilities which will help blind persons to function effectively in an office environment adding that the
achievements recorded by the commission so far can only be attributed to the support from the Ministry.

“I am also glad to inform you that lawyers with disabilities can now transcribe the letters of their litigation into brail and prove their abilities in courts” he said.

The Permanent Secretary, Bashir Nura Alkali, commended the Executive Secretary for his unprecedented show of passion towards advancing the course of Persons With Disabilities since his assumption of office in the last one year..

He however, buttressed on the importance of accountability and stewardship in Civil Service as exemplified by the Commission’s helmsman.