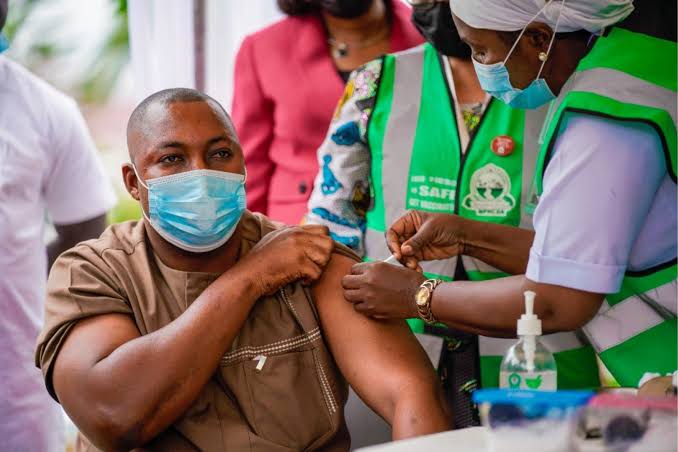 Report Presented to the Parliament of the Economic Community of West African States (ECOWAS) Parliament indicates that Nigeria has successfully vaccinated three million, nine hundred and thirty-eight thousand, nine hundred and forty-five (3,938,945) eligible people across the country.The report was presented to the parliament at the ongoing Second Ordinary Session by the Nigerian Delegation of lawmakers in Abuja.The report presented by a member of the Nigerian House of Representatives, who is also a member of the Community Parliament Lynda Chuba Ikpeazu, said over three million Nigerians are vaccinated which represents 98% utilisation of the 4,024,000 (four million, and twenty-four thousand) doses of the Oxford AstraZeneca vaccine.In total the report states that, 2,534,205 (two million, five hundred and thirty-four thousand, two hundred and five) people have so far received the first dose of the vaccine, while 1,404,205 (one million, four hundred and four thousand, two hundred and five) persons have received the second dose of the vaccine. “As it stands, Nigeria is making concerted efforts to reach ‘herd immunity’ levels. “For this to be achieved, we need to vaccinate a total of 80Million eligible persons or 40% of our 200Million population by the end of 2021.“Nigeria also has to vaccinate 140 million persons or 70% of her population by the end of 2022 for immunity to be achieved,” the report added. The delegation also informed the session that most reports about Nigeria’s security situation is not true the government has put in place measures to tackle it and the nation is stable, despite pockets of insecurity incidents.“The country has recorded several victories in the fight against insurgency and banditry. “On the issue of Boko Haram insurgency, according to the report, in August 2021 the Nigerian Government through intensive efforts of the Nigerian Army recorded a milestone in the fight against local terrorism, according to the report.“186 (one hundred and eighty-six) members of the Islamic State West Africa (ISWAP) and Boko Haram surrendering to Nigerian troops.“As a result of this recent unprecedented mass surrender of ISWAP and Boko Haram members, security incidents in their operating areas of the North-East have significantly dwindled,” the report further disclosed.The report also decried the prevalence of drug abuse in Nigeria.According to the report, the commonly abused drugs in the country include cannabis, cocaine, amphetamine, heroin, diazepam, codeine, cough syrup and tramadol.“In Nigeria, the drug use prevalence is significantly higher than the global average, according to recent reports. ” The commonly abused drugs include cannabis, cocaine, amphetamine, heroin, diazepam, codeine, cough syrup and tramadol.“The National Drug Law Enforcement Agency (NDLEA) of Nigeria has cracked down heavily on the importation and distribution of illicit drugs. “In paying particular attention to our borders, the Agency has succeeded in intercepting over 6,300kg (six thousand three hundred) worth of illicit drugs in the month of November 2021 alone, and has arrested over 200 persons in connection therewith.“The report added that; “With an inward focus, the Agency is currently going after local distributors and retailers of illicit drugs and in the same vein, setting up rehabilitation centres in various parts of the country for the already addicted.“To mark the United Nations International Day against Drug Abuse and Illicit Drug Trafficking 2021, the NDLEA launched the War against Drug Abuse (WADA) initiative to encourage Nigerians to actively partake in the war against drug abuse.“The Initiative, Ikpeazu said includes public awareness programme and advocacy aimed at highlighting the dangers of drug abuse in our communities.The report also revealed that the Federal Government with the support of civil society would continue to work assiduously to ensure that more funds are earmarked to train and better equip drug law enforcement agencies to detect and apprehend drug traffickers through technological innovations.