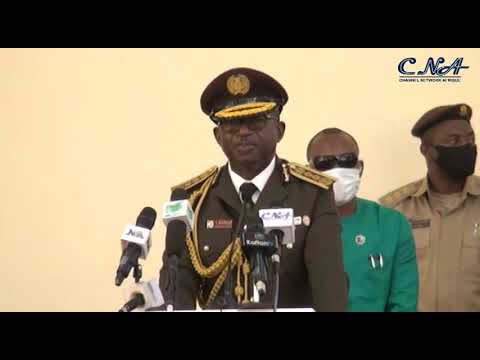 Babandede Bows Out As Jere Steps-in As Acting CGI

Muhammad Babandede has formally retired as the Comptroller General of the Nigeria Immigration Service with a promise to serve as an ambassador of the Service. Babandede gave the assurance at a valedictory session Organised in his honour at the NIS headquarters, Abuja. Babandede who acknowledged the support of the Federal Government and management of the NIS during his tenure as CG,urged personnel of the service to keep the fire burning. He however called for continuous implementation of ongoing reforms targeted at transforming the service into a world class service delivery agency. The major highlight of the day’s event was the handover of the baton of leadership of the Service to the Deputy Comptroller General of Immigration in charge of finance and Accouts, DCG Idris Isah Jere as Acting Comptroller General of Immigration. Earlier, DCG Idris Jere commended the out going CG for the positive change his tenure has brought saying the reforms will always serve as a landmark for the service. Several reforms Babandede who was appointment the 16th Comptroller General of Immigration on May 15, 2016 will be remembered for includes digitalisation of passport operations, introduction of a paperless administration, visa on arrival initiative among many others.