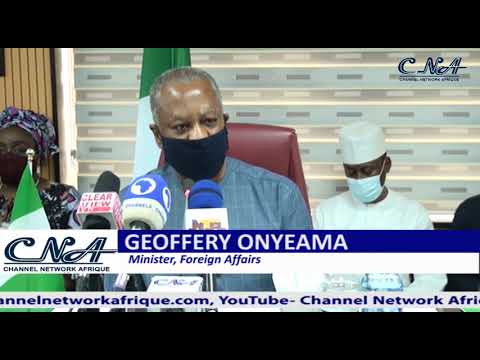 As part of efforts to combat global insecurity and high spate of terrorism, the Nigerian Government and it Saudi Arabia counterpart are joining force with other comity of nations to address the menace. This was part of agreement reached by the two countries when the Foreign Minister of the Kingdom of Saudi Arabia, Faisal bin Farhan Al Saud paid a courtesy visit to the Nigerian Minister of Foreign Affairs, Geoffrey Onyeama in Abuja. Addressing the Saudi Arabia’s delegation, Geoffrey Onyeama said the two nations have unique similarities in terms of Foreign policy in the area of security, economy, trade among others. On his part, the Saudi Arabian Foreign Minister said a Joint Commission, a framework which was last used about six years ago is being put in place to enhance the sustained renewed economic cooperation to boost the existing volume of trade between the two countries. The Saudi Arabian Crown Prince however, recognised the critical role being played by the two nations in there region adding that his country views Nigeria as a special friend due to the age long tie that has span about a century.

Kanu: US Based IPOB Lawyer Threatens To Drag Nigeria To ICC.