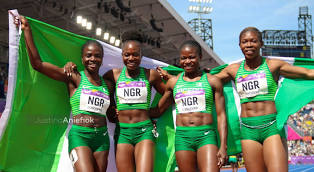 President Muhammadu Buhari has congratulated athletes, coaches and officials that represented Nigeria in the 2022 Commonweath Games for their glorious and historic performance at the Games.

In a statement signed by the Director, Press and Public Relations Mohammed Manga and made available to Channel Network Afrique, CNA, said the President, in his congratulatory message to the Team, stated that he joined millions of other sports loving Nigerians to watch some of the colourful and spectacular moments which resulted in the harvest of 35 medals, including 12 gold, 9 silver and 14 bronze by the Team for the country.

According to him, “I salute the memorable display of Team Nigeria athletes and I commend the 94 worthy ambassadors that proudly flew the Nigerian flag in nine sporting events for those exciting moments when the medalists brought smiles to our faces by breaking world, national and games records, as well as achieving personal bests in their career”

The President who thanked the shining stars of Nigeria for competing among the topmost athletes in the world and displaying the God-given attributes of the real Nigerian- never give up, strive to the end spirit, stated further that the achievement and memories will linger in the nation forever.

According to him, it is noteworthy that majority of the medals so far, including 12 gold for the country, were championed by our talented young women and girls, including multi medalist Tobi Amusan (100m Women’s Hurdle and 4x100m Relay), Favour Ofili, Rosemary Chukwuma, Grace Nwokocha (4x100m Relay); Miesinnei Mercy Genesis (50 kg), Blessing Oborududu (57 kg) and Odunayo Adekuoroye (57kg) in Women’s Freestyle wrestling; as well as Adijat Adenike Olarinoye (55kg) and Rafiatu Folashade Lawal (59kg) in Women’s weightlifting.

For me, he said, “this is a special moment and a fitting parting gift, being my last Commonwealth Games as Head of State.”

President Muhammadu Buhari also lauded the leadership and top management staff of the Federal Ministry of Youth and Sports Development, coaching crew and team officials, for the passion towards ensuring the development of sports in the country. He assured that history will remember them for all their contributions in making our athletes shine in the international arena.

The 11-day competition which had no fewer than 5,000 athletes representing 72 nations and territories, competed in 280 medal events.

Similarly, the Minister of Youth and Sports Development, Sunday Dare has commended the Nigerian contingent to the commonwealth games for their sterling performance at the just concluded competition.